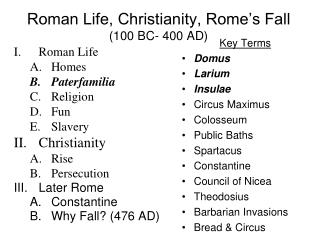 UNIT 11 Roman Law &amp; Roman Civil Procedure - . history of the roman civilisation - from the city of rome to the

Fall of Rome - . fall of roman empire. third century ad, rome faced many problems came from within and from the outside

The Church - . rise of the church. christianity was first persecuted nero started the persecution during the roman

Fall of Rome - . quiz. this man never met jesus, and actually persecuted christians in his early life. he would later go

Christianity and the Roman Empire - . chapter 9, section 2. the rise of christianity. romans conquer judaea in 63 b.c.

The Fall of Rome - . for centuries after the rule of its first emperor, begun in 27 b.c., the roman empire was the most

7.1 The Fall of Rome - . contributions of the roman empire law rule of law; many modern legal systems are based on roman

The Fall of Rome - . the fall of rome. for centuries after the rule of its first emperor, begun in 27 b.c., the roman