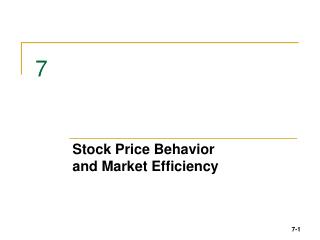 Stock Valuation - . one period valuation model. to value a stock, you first find the present discounted value of the

Binomial Option Pricing - Professor p. a. spindt a simple example a stock is currently priced at $40 per share. in 1

Chapter 9 - . the analysis of competitive markets. topics to be discussed. evaluating the gains and losses from

The Little Book that Beats the Stock Market - . chapter 1. bubblegum sales business: earns $500 for next 6 years what

3.2 Efficiency of the market structures using marginal analysis - . what is in this topic?. providing an explanation of: