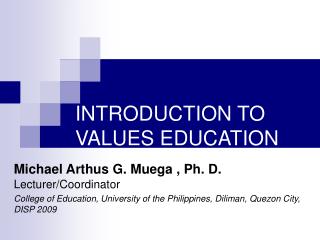 INTRODUCTION TO VALUES EDUCATION. Michael Arthus G. Muega , Ph. D. Lecturer/Coordinator College of Education, University of the Philippines, Diliman, Quezon City, DISP 2009. What is Values?. Values are our means of earning, maintaining, or increasing something or certain things.

Values/Character Education: Traditional or Liberational - . brought to you by: two chicks and a guy!. position 1: teach

MORAL SCIENCE CULTIVATION OF VALUES 1 A - . by alexander mathew thomas of 7 k. why is there a need for value education?.

Values - . values: collective ideas about what’s right or wrong; good or bad; desirable or undesirable by a particular

UNESCO International Values Education Project - . terry lovat the university of newcastle. learning to live together and

THE FIVE VALUES AS THE POWER OF LIFE - These five values are verily the five life-breaths of man. one who consider human

Ethics, values and virtues - . moral dilemmas from ancient rome to our times. what is a moral

Self Awareness and Filipino Values - . nature of self and self-awareness. according to birch (1997), one of the most

Values - . what is a value?. qualities, characteristics, or ideas about which we feel strongly. our values affect our

PRINCIPLES AND STRATEGIES OF VALUES EDUCATION INSTRUCTION - . vanessa oyzon, m.a. college of education, university of the