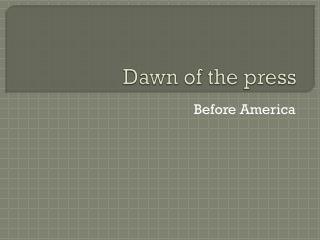 Dawn of the press

Dawn of the press

Holy Spirit, Truth divine, Dawn upon this soul of mine; Comforter and inward Light, - Wake my spirit, clear my sight.

The Knight at Dawn - . castles. moat. moat. drawbridge. moat. what is a moat ?. a moat, which is a deep, wide trench, was

The Evolution of Language - . summary of gardenfors, p. (2003). the dawn of language. in how homo became sapiens: on the

The Dawn of Creation and the Beauty of the Universe - . wichita state university april 6, 2010 steven beckwith university

Twilight: Breaking Dawn - . by cody. my favorite book is twilight : breaking dawn. it’s one of the twilight series.

Part 12: A New Dawn - . god’s light shone through the darkness in the form of a new mission for the foundress of the

Attribution in the press - . quotation and attribution. reporting language. language is content , tool , and expression

Dawn of a New Century - . russia is forced to reform. how do you express yourself in an autocratic regime?. think of how