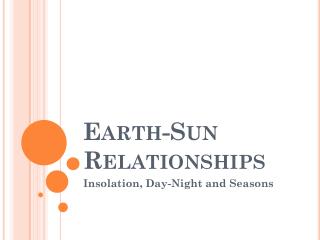 Seasons - . what do you know about seasons?. seasons. a season is one of the major divisions of the year, generally based

All About Earth - . by rachael and rebecca!. our solar system planet earth is the 3 rd planet to the sun. earth is….

Solar Variability and its Effect on Earth and its Inhabitants - . announcements. reading assignment chapters 10 and 11 4

Earth-Sun Relations Lab# 10 Exercise #12 page 173 - . weather. the state of the atmosphere at a particular place for a

Earth’s Weather and Climate - . weather the condition of the atmosphere at a certain time and place. changes daily

WEATHER, CLIMATE, &amp; ATMOSPHERE - . earth’s relationship with the sun. most of the earth’s energy comes from

THE GEOLOGIC TIME SCALE: THE HISTORY OF EARTH - . geologic time scale. look at this time scale. tell me 5 things about

Reasons for Seasons - . earth’s axis is tilted!. the axis is an imaginary line drawn through the planet from the north

What causes the Seasons? - . ms. bridgeland – 6 th grade . the seasons happened by accident! the earth was supposed to

Seasons - . what causes earth’s seasons. they are caused by earth’s orbit around the sun and the way that earth tilts

Earth-Sun Relationships - . the reasons for the seasons. why is it hot in the tropics and cold at the poles?. the earth

Earth-Sun Relationships - . the reasons for the seasons. solar radiation. the earth intercepts less than one