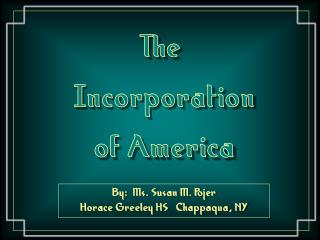 The Incorporation of America The Incorporation of America. By: Ms. Susan M. Pojer Horace Greeley HS Chappaqua, NY. Essential Question. Industrialization increased the standard of living and the opportunities of most Americans, but at what cost?. Life in the 1860s No indoor electric lights No refrigeration

The Incorporation of America