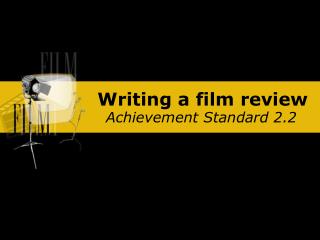 Writing a Film Review UNIT 2 - L.o: to consider the structure of a review and plan my own response. . writing a film

Writing a Film Script - . formatting your film script. here is some terminology for the different parts of the layout of

Film review - . i basic information about the film. ii a brief summery of the plot. iii your opinion – good and bad

FILM REVIEW - . by ana cañete. when i think in a good film, an idea came to my mind qickly:. titanic. most of people

Film review - . i'd like to speak about the film called &quot; ice age &quot;. the director of the film is

Writing Film Reviews - . 2.4 task. what is the purpose of a film review?. to inform people about the film. to give an

Writing a Book Review - . uncuyo language v may 2013. overview. what is a book review? summary vs. review the writing

Writing a movie review - . studying your source material. gather basic facts about the movie. here's what you need to

Writing a Book Review - . danika rockett university of baltimore summer 2009. questions to consider…. why do people

Writing a literature review - . dr cheryl lange. integral aspects of academic work. there are a number of stages in