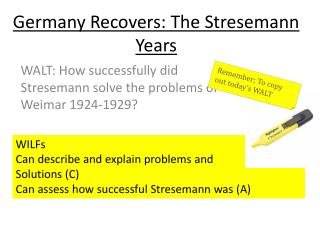 Remember; To copy out today’s WALT. Germany Recovers: The Stresemann Years. WILFs Can describe and explain problems and Solutions (C) Can assess how successful Stresemann was (A). WALT: How successfully did Stresemann solve the problems of Weimar 1924-1929?.

Stresemann exam questions - . all of this was being funded on american loans. america could withdraw money and investment

Weimar Germany - . really good website on weimar germany: i would suggest using it combined with the powerpoint to create

What did Stresemann do? - . golden era of weimar. treaty of versailles. spartacists. 1924-29 period of stability after

The Locarno Agreement - . keylor (p.117-118) a presentation by charlotte larson. germany was willing to make a deal with

The Stresemann Years 1924-29 - . saviour stresemann. what is the message that is being portrayed in the cartoon?. he

Nazis Part 1: Helped Into Power (Video Questions) - . 1) how did germans allow hitler &amp; the nazis to come to

Germany Recovers: The Stresemann Years - . starter read through the information on hyperinflation highlight the key

Weimar Germany : challenges, problems and failure - . as part of the allied conditions for surrender at the end of world

The extent of recovery in the late 1920s - . l/o – to identify the achievements and underlying problems of the weimar

The recovery of the Weimar Republic - . by the end of this lesson you will: understand how the weimar republic appeared

How did the Weimar Republic recover under Stresemann? - . “what economic, social and political problems did i face when