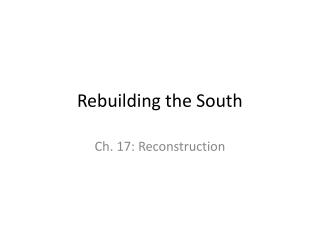 Rebuilding the South. Ch. 17 : Reconstruction. Reconstruction. The process of readmitting the former Confederate states to the Union Lasted from 1865 to 1877. Damaged South. Cities, towns, and farms were ruined High food prices and crop failures meant starvation Rebuilding the South - . section 1 chapter 17. focus questions. what effect did the end of the civil war have on african

Rebuilding the Government - . in iraq and post-civil war south. the united states provided assistance to iraq in an

Rebuilding the Temple - . ezra 3:10-13. while boschke’s wall stood firm, solomon's temple did not. the temple’s

Rebuilding the Walls - . nehemiah 1:3-4 “those who survived the exile and are back in the providence are in great

REBUILDING - Reconstruciton. rebuilding. the south. essential question. what were some of the plans of government to

REBUILDING - . the. walls. nehemiah. things you can learn from a boring chapter. nehemiah 7. nehemiah

REBUILDING - . the. walls. nehemiah 4. nehemiah. responding to the enemies attacks. “rome remained great as long as she

The Rebuilding of Japan - . essential questions: what led to the destruction of the majority of japan’s cities during

Rebuilding Together - . volunteer information. rebuilding together . our