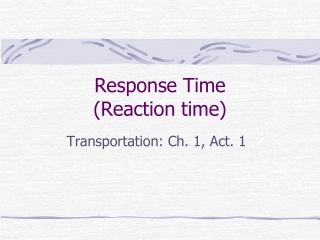 Definition of Reaction Rate - . the reaction rate is the increase in molar concentration of a product of a reaction per

CH. 3 Time Response - . 3.1 introduction. how to use poles and zeros to determine the response of a control system. how

A Microfluidic System for Controlling Reaction Networks In Time - . presented by wenjia pan. a microfluidic system for

Flow Time and Theoretical Flow Time - . 1: flow time 2: paths on a network of activities and the critical path 3: flow

PCR reaction to be visualized “in real time” as the reaction progresses - Real time quantification. pcr reaction to

Chemistry 100 - . chapter 14 - chemical kinetics. the connection between chemical reactions and time. not all chemical

Decision Making - . what is decision making? what is the relationship between reaction time, movement time and response

Avoiding Collisions - . what is reaction time?. the time it takes to respond to a situation. investigate. how did we test

Reaction Rates and Equilibrium - . - rate – a measure or the speed of any change that occurs within any interval of

Chapter Challenge Presentation - . driving safe. kazuya tanigami and anastasios aktipis. what is reaction time? why is it