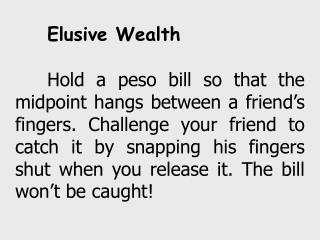 Elusive Wealth Hold a peso bill so that the midpoint hangs between a friend’s fingers. Challenge your friend to catch it by snapping his fingers shut when you release it. The bill won’t be caught!. There was a young man who had heard, That a person could fly like a bird. To prove it a lie Project Elusive Hyena - . devised by joão caeiro. objectives:. discover which type of hyena there are in kariega game

The Elusive Writer - . there are many theories about who the writer may have written arabian nights, but no one is

Frankenstein : Elusive Ghosts - . “i am a blasted tree; the bolt has entered my soul; and i felt then that i should

Wealth - . what is left behind after you take away the money. balancing work and home life. missing element. me. kacang.