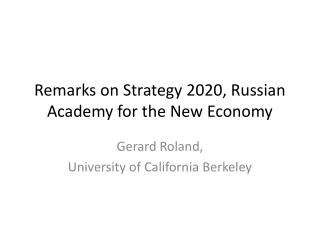 Remarks on Strategy 2020, Russian Academy for the New Economy

Remarks on Strategy 2020, Russian Academy for the New Economy

Investment In Russian Industry - . deputy minister for economic development and trade of the russian federation a.

Healthcare in Russia : Trends and Prospects Import substitution and Innovative development of Russian Pharmaceutical In

Energy Strategy of Russia for the Year 2030: Approaches, Priorities and Reference Points - . alexey gromov phd in

Get ready for Marketing 2020 - The 2020 consumer is coming fast. companies need to get ready for a new form of marketing.