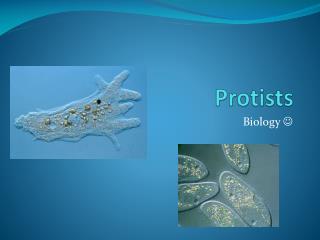 Protists. Biology . Protist characteristics. Protists are organisms that do not fit into any other kingdom. They can either by uni -celled or simple multicellular. They can be animal -like, plant -like, or fungus -like.

Protists - . chapter 29. protists. protists are the most diverse of the four eukaryotic kingdoms -unicellular, colonial

Protists - . eukaryotes w/o tissue level of organization as in animals, plants, and fungi. generalizations. most

Protists - . what does these figures look like to you? they actually are diatoms. provide food for whales. what is a

Protists - . what is a protist?. the protist kingdom is also known as the “ junk drawer kingdom”. think! what does

Protists - . in the box to the left write out characteristics about each phylum of protists . include: body type motility

PROTISTS - . chapter 19. kingdom protista (most diverse kingdom). all are eukaryotic unicellular or multi-cellular

PROTISTS - . diatoms. commonalities / differences in the protist kingdom. all are eukaryotes (cells with nuclei). live in

What are protists? - A protist is a member of a group of eukaryotic organisms, which have a membrane-bound nucleus.

Protists - . pages 226-235. what are protists ?. 1. protists are eukaryotes that cannot be classified as animals, plants

Protists - . the most diverse kingdom of eukaryotes mostly aquatic organisms mode of nutrition is used to classify

PROTISTS - . kingdoms archaebacteria eubacteria fungus protists animal plant. what is a protist?. organisms that share a