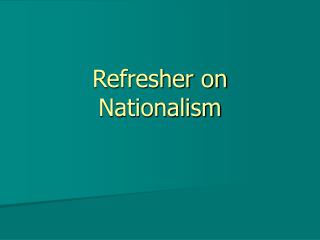 Refresher on Nationalism. Congress of Vienna. In 1815, the Congress of Vienna restores the Old Order Absolute monarchs back Re-draws the map, different ethnicity groups are thrown together into one territory. In France. Napoleon is Emperor until 1815 The US Becomes A World Power - . u.s. expansion and the spanish-american war

Points we will cover: - . the treaty of versailles the depression background to the nazi party anti-semitism and the

A HISTORICAL REVIEW OF THE INDUSTRIAL REVOLUTION - . by: lorenzo gutierrez. vocabulary. “laissez-faire”- the doctrine