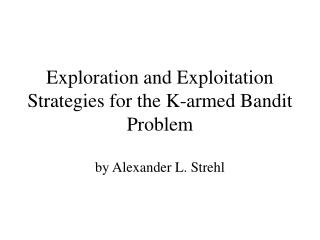 Exploration and Exploitation Strategies for the K-armed Bandit Problem Exploration and Exploitation Strategies for the K-armed Bandit Problem

European Exploration - . reasons for exploration. europeans come to the new world. to better understand the reasons for

Lecture 10 - . some comments: things you should know, and scaling. problem strategies: understanding and solving

The Age of Exploration - . good times unless you are a native. the age of exploration. 1400s ventured out 1. trade/money

Exploration 1450-1700 Is contact with other cultures beneficial or harmful to a civilization? - . exploration-in a

European Age of Discovery (Age of Exploration) - . what were the causes of european exploration?. gold - desire to

The Age of Exploration - . a.k.a the age of discovery. standards in this unit. sswh10. the student will analyze the

Key Strategies for Mathematics Interventions - . heather has 8 shells. she finds 5 more shells at the beach. how many

FINANCIAL EXPLOITATION OF VULNERABLE ADULTS - . for employees of financial institutions, broker-dealers and investment

Clinical Problem Solving Strategies - . placebo effects. placebo is latin for “i will please” refers to any type of