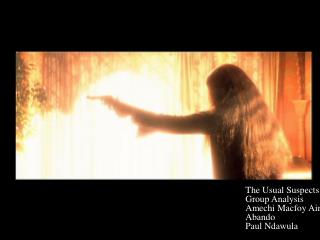 The Usual Suspects Group Analysis Amechi Macfoy Aimee Abando Paul Ndawula. The movie begins by establishing a setting in the aftermath of a shootout at a boat on a pier. The scene ends with the boat being set on fire.