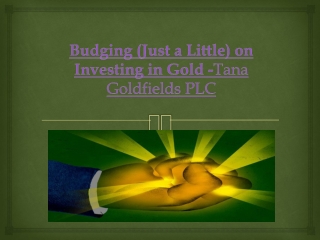 Budging (Just a Little) on Investing in Gold -Tana Goldfield

Budging (Just a Little) on Investing in Gold -Tana Goldfield

W.o.gs on the goldfield - . by alexander and daniel. what did the w.o.gs wear??. chinese men wore there hair like a

Investing Basics - . stratetiges of investing – mr. yates. investing what? why?. the main question— what do i want to

Tana Johnson University of Chicago tana@uchicago - Guilt by association? how anti-u.s. sentiment may undermine the

GOLD - . http://en.wikipedia.org/wiki/gold. types of gold…. most of these come from south africa. other countries like

9.1 Investing basics - . goals: explain the relationship between risk and return when investing. describe how to

Gold Investments - . by kainoa simao period 2. what is gold . chemical element who’s symbol is au gold is the current

The Basics of Investing - . ms. lewis personal finance. general overview. there are no sure things when investing any

fundamentals of Value Investing - . 10/19/2009. what is value investing?. definition: investing in firm worth more than

Investing - . investing investing is taking a long term perspective and is a process of purchasing securities wherein