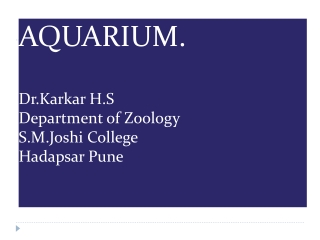 AQUARIUM. Dr.Karkar H.S Department of Zoology S.M.Joshi College Hadapsar Pune. AQUARIUM. • Introduction • An Aquarium, as seen in the picture, is a tank wherein all water creatures such as fishes, rocks that fishes need for shelter, plants that they used as food and many more.