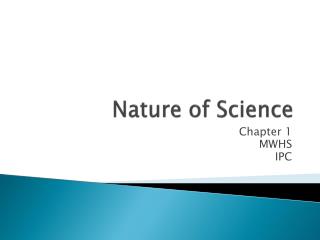 Nature of Science. Chapter 1 MWHS IPC. What is Science?. Science is a method for studying the natural world. It is a process that uses observation and investigation to gain knowledge about events in nature. What is Science?. Nature follows a set of rules.

Lecture 5,6 January 15, 2010 - . nature of the chemical bond with applications to catalysis, materials science,

ATTACKING THE SCIENCE TAKS - . cypress lakes. objective 1:. the student will demonstrate an understanding of the nature

Science FCAT Benchmark Review - . strand a – the nature of matter. what is matter? anything that has mass and takes up

Chapter 1: The Nature and Methods of Economic - . definition of economics. the social science concerned with the

Atoms and Elements:The Nature of Matter - . “it’s easier to break an atom than a prejudice” a. einstein. chemists

CHAPTER 2 THE SUPERORDINATE NATURE OF MULTICULTURAL COUNSELING AND THERAPY - . themes from the difficult dialogue.

Science and Society - . canada foundation for innovation october 24, 2006. why do we have science anyway?. to improve

Introduction and The Nature of Science - . the nature of science. science: observation of the world and the constant