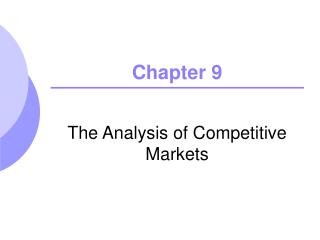 Chapter 9. The Analysis of Competitive Markets. Topics to be Discussed. Evaluating the Gains and Losses from Government Policies The Efficiency of a Competitive Market Minimum Prices Price Supports and Production Quotas Import Quotas and Tariffs The Impact of a Tax or Subsidy.