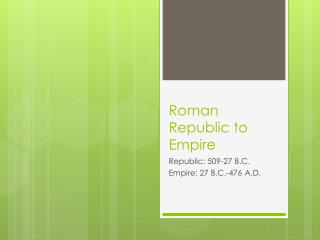 Roman Republic to Empire. Republic: 509-27 B.C. Empire: 27 B.C.-476 A.D. The end of the Roman Republic. Julius Caesar is assassinated March 15, 44 B.C. Fighting breaks out between Mark Antony and Octavian By 27 B.C. Octavian has won. Beginning of the Empire.

7.1 The Fall of Rome - . contributions of the roman empire law rule of law; many modern legal systems are based on roman

THE ROMAN ARMY - . introduction. the spread of the roman empire was partly due to the fact that the roman army was so