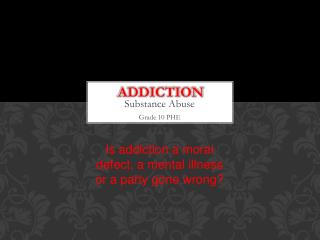 Addiction . Substance Abuse Grade 10 PHE Is addiction a moral defect, a mental illness or a party gone wrong?. WHAT DO YOU WANT TO SEE?. I am at a meeting tomorrow for safe schools and I would like input from you about what you would like to have or see at the school!.

Presentation to the 8 th Annual Georgia School of Addiction Studies - . evidence based principles of offender

Addiction to Medicines - . over the counter, prescription only medicines and benzodiazepines. the rise of polypharmacy.

Are You an Addict? - . we shall see. internet addiction test (iat). developed by dr. kimberly young 20-item questionnaire

Drug Addiction - . addiction: what is it?. addiction is ones dependence or need to use certain substances in order to

Signs Of Drug Addiction - Just like every other disease, drug addiction harbours many signs that are indicators of