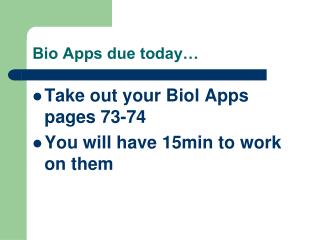 Bio Apps due today…. Take out your Biol Apps pages 73-74 You will have 15min to work on them. After Graffiti Review…. Write down one thing remember about the following topics DNA Structure DNA Replication Protein Synthesis Mendelian Genetics Non- Mendelian Genetics Genetic Disorders Google Apps in Classrooms and Schools  - . 32 ways to use google apps in 50 minutes. julia stiglitz google apps for

All the chips outside… and around the PC what new platforms? Apps? Challenges, what’s interesting, and what needs