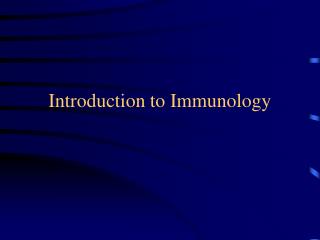 Introduction to Immunology. I. General Introduction. A. Definitions. Immunity: the state of protection from infectious disease involving specific and non-specific elements

Allergy and Immunology Board Review - . most of this power point was prepared by drew white. basic immunology asthma

Mechanisms of Transformation by Retrovirues - . virology 324a dept. of microbiology and immunology mcgill university dr.