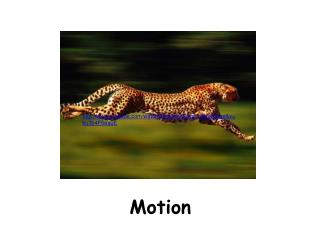 Motion. http://www.youtube.com/watch?feature=player_detailpage&v=ku3b4F5eauE. What is Motion ?. Motion A change in distance between two things. One of those things is a reference point. 2. A reference point. is a place or thing Modeling Motion - . the nature of motion appears to be the question with which we begin. -- socrates. our universe is in

Term 4 Notes - . forces and motion &amp; engineering. motion: is the change of position or location over a certain

Motion and Momentum - . what is motion? by: sumaya j. matter &amp; motion. all matter in the universe is constantly

Motion - . chapter 2. how can we describe motion? words pictures/diagrams which is better? why?. describing motion.

rOTATIONAL MOTION - . what is rotational motion?. what does a yo-yo have in common with a merry-go-round?. how can we

MOTION - . motion. motion – the act or process of an object changing position. how do we know when an object has moved?

Ch. 10 Motion - . i. measuring motion. a. observing motion 1. frame of reference is used to observe motion a. using a

MOTION IN TWO DIMENSIONS - . some diagrams and simulations from www.physicsclassroom.com. projectile motion. newton's

MOTION - . by. joko yohanis sma n 3 jayapura. outcome. after study this lesson student will be able: - to understand

Forces and Motion - . motion. what do you think it means to be in motion? how can we tell if something is in motion?.

Motion - . event that involves a change in the position or location of something. definition. motion is relative.