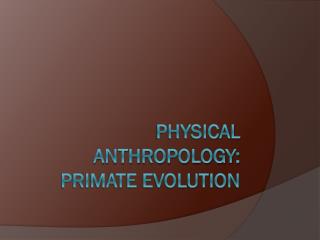 Physical Anthropology: primate evolution. By the end you should know. Taxonomy classification terms When and where the first primates evolved Characteristics that distinguish different primate groups Various aspects of primate behavior. Taxonomy.

Chapter 5 Overview of Living Primates - . key terms. prosimians members of a suborder of primates, the prosimii.

Evolution of Hominoids - . humans as hominoids. the hominoidea can be divided into 2 families: the hylobatidae gibbons,

The Primates - . our place among the primates homologies and analogies, primate tendencies, human similarities and

Characteristics of the Primates - . comparative primate anatomy. human origins. origin of the human genus homo is one of

Anthropology: The Human Challenge 13th edition - . chapter 1. the essence of anthropology. chapter preview. what is

The Primates - . key questions. where do humans fit in the world of living things? what are the characteristics of

Chapter 3 - . the beginnings of human culture. chapter outline. to what group of animals do humans belong? when and how

Lecture 2-2 - . the beginnings of human culture. lecture outline. to what group of animals do humans belong? when and how