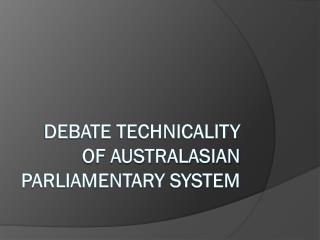 DEBATE TECHNICALITY OF AUSTRALASIAN PARLIAMENTARY SYSTEM. debate is all about arguing between affirmative/government team and negative/opposition team upon a motion. Affirmative support the motion Negative  deny the motion. MOTION.

Value Debate - . mr. lyke speech &amp; debate. the place of value in action. application. a proposition of value is a

Presentation to the Parliamentary Portfolio Committee for Health 14 March 2003 - . ara vision. to be the representative

The Other Side of the HIV/AIDS Debate: Evaluating Scientific Evidence Hidden in Plain Sight - . the public face of hiv is

Basic Debating Skills - What is a debate? . a debate is basically an argument. that is not an undisciplined shouting

Coalition theories - . from seats to government. after elections, parliamentary seats are assigned and parliamentary

Practicing Parliamentary Procedure - . how can i survive a formal meeting?. have you ever experienced…. meetings that