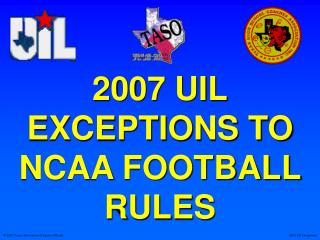 2007 UIL EXCEPTIONS TO NCAA FOOTBALL RULES 1-1-1-a ARTICLE 1. a. The game shall be played between two teams of no more than 11 players each, on a rectangular field and with an inflated ball having the shape of a prolate spheroid Change to 6 players 1-1-4-a

Exceptions and Exception Handling - . goal: to illustrate the various models of exception handling and to show how

What You Always Wanted to Know About Exceptions But Were Afraid to “Raise” - . currie colket the mitre corporation

Java 212: Exceptions Handling - . chapter objectives. learn what an exception is see how a try / catch block is used to