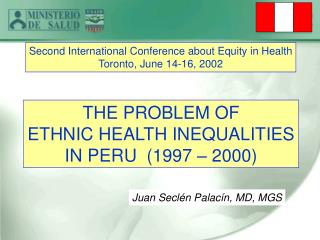 Second International Conference about Equity in Health Toronto, June 14-16, 2002 THE PROBLEM OF ETHNIC HEALTH INEQUALITIES IN PERU (1997 – 2000) Juan Seclén Palacín, MD, MGS INTRODUCTION Over the past 5 years, the Peruvian government has developed

Higher Modern Studies Wealth and Health - . areas of the course that can be examined are limited. causes of inequalities

Chapter 1: Equations and inequalities - . big ideas: use properties to evaluate and simplify expressions use problem

Writing and Solving Inequalities - . writing and solving inequalities. lesson objective: 4.01 students will know how to

7.6 Systems of Linear Inequalities Word Problems - . goal: use a system of linear inequalities to model a real-life

Aims of the lecture - Global inequalities in assessment of migrant and ethnic variations in health raj bhopal cbe, dsc

The Cause of Health Inequalities - . the black report (1980). this was ground-breaking in that it identified a clear gap