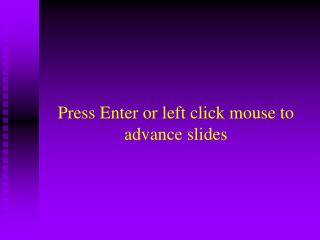 Click Mouse to Advance Slides - A tribute to sheila sheila wanted her life to be celebrated, and would want the music to

Left click (or spacebar) to advance slides and animations - . presented by bwb technologies. a guide to flame photometer

Click mouse to advance - Located on the shoreline of galendzhik lake, some three hours drive from downtown moscow,

CLICK TO ADVANCE SLIDES - Tommy's window slideshow. marriage is…. dedicated to our daughter debbie &amp; her

Click to advance slides - . the world's biggest and most expensive cruise ship, oasis of the seas, docked at the stx

CLICK TO ADVANCE SLIDES - The tumbling barrel and you . tommy's window slideshow. ♫ turn on your speakers!. click to

(Click or use arrow keys to move through the slideshow) - . * we do not claim that any of these treatments, investigative