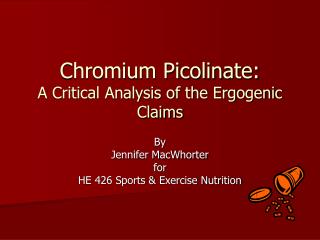 Chromium Picolinate: A Critical Analysis of the Ergogenic Claims

Chromium Picolinate: A Critical Analysis of the Ergogenic Claims. By Jennifer MacWhorter for HE 426 Sports & Exercise Nutrition. Classification & Usage. Cr(pic)3 is the combination of the essential trace mineral chromium and picolinic acid.

Chromium Picolinate: A Critical Analysis of the Ergogenic Claims

Is Jennifer Brunner Honest? - Does your vote really count?. answer after you watch this. campaign contribution research

Jennifer Lopez - . by kristina rankovic. jennifer lopez was born in 1974 in the bronx. she lived in the section called

Jennifer Laura Sewell - . caroline sewell. f ast facts. jennifer laura sewell jenny is my aunt on my dad’s side she was

Jennifer Skuja , Mary Patterson, and Gordon Love - . this presentation will tell you about ireland, and its culture.....