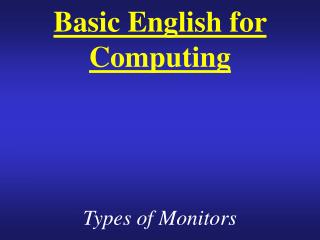 Basic English for Computing Types of Monitors What is Monitor ? The main output device

INTRODUCTION - . devi apriyani, m.pd . your lecturer for this semester. bahasa inggris i i. credit : 2 sks score :

Technical English - Introduction. you will be able to understand the basic structure of the english language. teacher:

Grammar Y our English - . grammar. is the basic of english language is the whole system and structure of a language or of

Ecphrastic poetry &amp; the development of professional literacy in computing - . what is ecphrastic