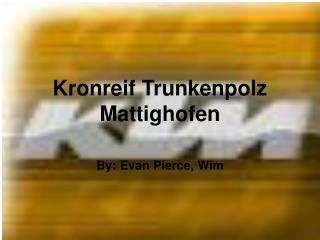 Kronreif Trunkenpolz Mattighofen By: Evan Pierce, Wim KTM High Performance motorcycle company from Austria Produce Mini-bikes ,Dirt Bikes, Sport Bikes, and Dual Sport Bikes Company Colors Orange, Gray, and Black They are the only non-Japanese bike that is part of the big 5 How They Started

american race motorcycle - Eexcelsior motorcycle was taking over from cycles in competitions, too. many races took part

Gas dirt bikes - Buy top quality gas dirt bikes at the most reasonable prices. just visit our website and check out the

Motocross - . i recently started riding dirt bikes, but when i did i fell in love with motocross racing. i love the

Robbie Hummel by Evan C ummings - . i learned a lot about my awesome bro- mance brother robbie hummel. on june 28,2012

The Pomegranate By Evan Boland - . presented by chelsea and brittany. vocabulary. pomegranate- a round reddish fruit with