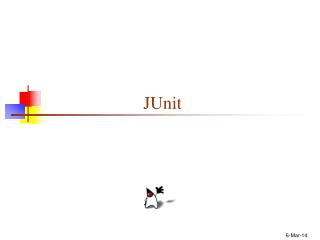 JUnit Test suites Obviously you have to test your code to get it working in the first place You can do ad hoc testing (running whatever tests occur to you at the moment), or You can build a test suite (a thorough set of tests that can be run at any time) Disadvantages of a test suite

The Impact of DevOps on Software QA Testing - As a group of project management techniques, devops emphasizes on making

JUnit - . a unit test framework for java authors: erich gamma, kent beck objective: “if tests are simple to create and

Testing all kinds of Java things using JUnit and its extensions - . kalvis apsitis. what are “programmer tests”?.