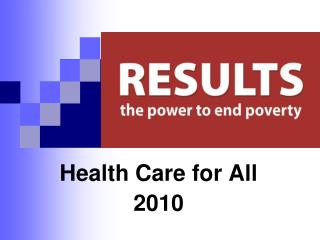 Health Care for All 2010 Making History Today after almost a century of trying, today after over a year of debate, today after all the votes have been tallied, health insurance reform becomes law in the United States of America.

Maternal and Child Health - . learning objectives. by the end of this session, participants will be able to: explain the

Child Nutrition Program Regulations “The Basics” 2011 – 2012 - . understanding the regulations and requirements for

Nutrition - . what do you think of when you hear the word nutrition ?. what is nutrition?. nutrition is the process of