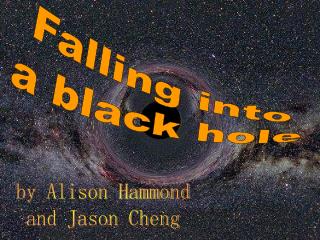 Falling into a black hole

Falling into a black hole. by Alison Hammond and Jason Cheng. Background-Gravity. Gravity is one of the four fundamental interactions. General Relativity (GR) is the modern interpretation of gravity.

Falling into a black hole

Why is Yvonne &amp; Shawn Mars’s pig farm falling into the sea? - . a coastal geography mystery. watch this film

Rethinking Race and the origins of a split among white v. black and black v. black - . professor robert j.

Black Holes and SpaceTime - . july 23, 2004. topics of the day. properties of black holes mass spin size a few words from

Falling Objects and Projectile Motion - . chapter 3. acceleration due to gravity. what happens if we drop an object? does

Today in Astronomy 102: the insides of black holes - . physics and metaphysics, positivism and idealism: should we