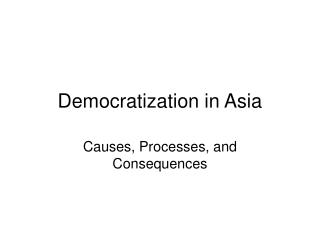 THE DEMOCRATIZATION OF TAIWAN IN INTERNATIONAL PERSPECTIVE - . by linda gail arrigo.

Democratization - . james robinson harvard university. basic questions. how do we measure democracy? why are some

Security and Economic Development in SE Asia - . creating a “ win-win“ situation for the czech republic. growth

Is the US a more democratic nation as a result of the democratization of the legal system? - . originalism/restraint:

Struggle for Democracy in South Asia - . what caused the ongoing conflict in south asia?. struggles after independence in

Democratization - . by sam dembling. democracy and its variants. democracy - government by, of and for the people in

DEMOCRATIZATION IN AFRICA: - . what progress by what means?. outline of presentation:. the study of democratization