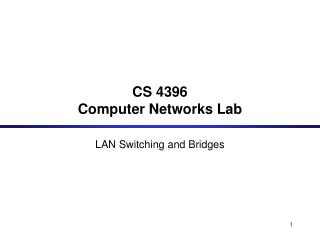 CS 4396 Computer Networks Lab - . lan switching and bridges. introduction . there are many different devices for

Implement Inter-VLAN Routing - . lan switching and wireless – chapter 6. objectives. explain to the satisfaction of a

Classification of Matter - . elements. note that an element: consists of only one kind of atom, cannot be broken down