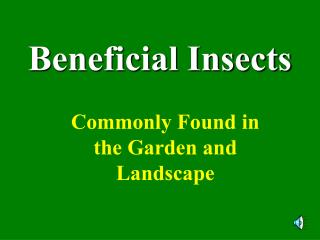 Beneficial Insects Commonly Found in the Garden and Landscape Assassin Bugs Assassin bugs prey on aphids, caterpillars, beetles, leafhoppers,and other insects. They do not like to be handled. Big-eyed Bugs These small insects with big eyes attack spider mites, thrips, aphids and other

Insects - . insect bad guys!. you’ll never look at a bug the same. what is an insect?. 3 body parts. head. thorax.

Beneficial Insects - . by: antonio mesta and mario h islop. ladybug( coccinellidae ). the ladybug is one of the most

Entomophagous Insects – The Insect-Consuming Insects - . predators and parasitoids. what is “natural control” ?.

The First 900 Most Commonly Used English Words - . taken from: the reading teachers book of lists, third edition, by