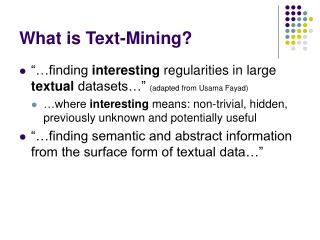 Text Mining - . challenges and possibilities. information overload. there’s too much. we would like better retrieval

Text Mining - . what is text mining?. there are many examples of text-based documents (all in ‘electronic’ format…)

What is a text? - . a text is a sequence of paragraphs that represents an extended unit of speech. according to de

What is Web Mining? - . discovering desired and useful information from the world-wide web. articles. how to find the

What is Data Mining ? - . by saurabh jain. general concept of data mining. most organization have accumulated a great

What is Mining? - . liz larosa 7 th grade science. what is mining?. mining is extracting ore or minerals from the ground

Text Mining - . an inter-disciplinary research area focusing on the process of deriving knowledge from texts exploit

WHAT IS DATA MINING? - . data mining is the process of exploration and analysis, by automatic or semiautomatic means, of

What is Mining? - . what is mining?. mining is extracting ore or minerals from the ground an ore is a natural material

What is Mining? - . liz larosa 5 th grade science www.middleschoolscience.com 2010. what is mining?. mining is extracting

What is Informational Text? - . types of informational text. • textbooks • trade books • autobiographies and