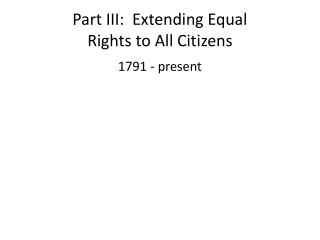 Part III: Extending Equal Rights to All Citizens. 1791 - present. December 1791. The states have established their independence from Britain, and have become one nation. The U.S. Constitution has been ratified by all 13 of the states. A bill of rights, in the form of amendments Are we all equal citizens? - . your homework was to think about what forms of active citizenship you could undertake in

III. The Struggle for Equal Rights - . many struggles for minority groups in 1960’s to gain equal rights: a. civil

EQUAL RIGHTS AMENDMENT - . section 1. equality of rights under the law shall not be denied or abridged by the united

Rights of Citizens - . the bill of rights amendments i -

EQUAL RIGHTS VS. CIVIL RIGHTS - . civil rights are privileges guaranteed by a government that protect an individual’s

The Equal Rights Amendment - . section 1 : equality of rights under the law shall not be denied or abridged by the united

Equal Rights for Women - Shirley chisholm—washington, d.c., may 21, 1969. equal rights for women. what is chisholm’s

CITIZENS RIGHTS AND JUSTICE - . section 3 of final document. why do we think this topic is important?. citizens rights

Equal Protection: Gay Rights - What level of scrutiny should be applied to laws that classify gays differently?. ap