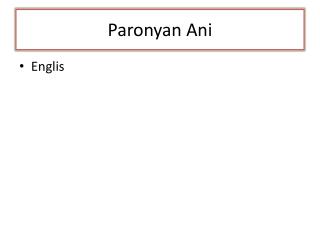 Paronyan Ani. Englis. Art and Music. Art is something that stimulates an individual , s through the emotions, beliefs or ideas through the senses. Artists used many styles in their paintings and drawings. There are some of the common styles of art. Fernando Botero Cat. LA MULTI ANI ! - . from andrada, adina si cosmin pintilie. 2014. past another year. . think at the past of the years like