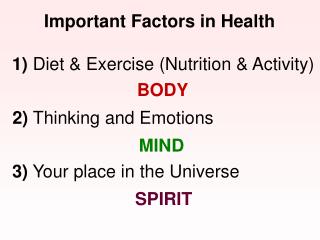 Important Advances In Health Technology - Interested in learning more about health technology and its opportunities?

Cultural Factors in Mental Health - What the lecture deals with:. overview of culture/cultural

Factors Influencing Health - Determinants of health. environmentbehaviorsgeneticsaccess to and utilization of healthcare.

Inequalities in Health: Lifestyle Factors - . l.i. to understand the impact of lifestyle choices on health. success

Is Health Education Important in Schools? - . by michelle klochack. what is health