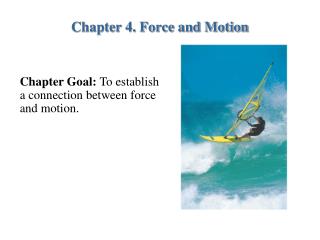 Chapter 4. Force and Motion. Chapter Goal: To establish a connection between force and motion. Student Learning Objectives. • To recognize what does and does not constitute a force. • To identify the specific forces acting on an object. • To draw an accurate free-body diagram of an object. Unit 4 FORCES AND THE LAWS OF MOTION - . force : a push or pull exerted on an object forces cause a change in velocity (

Chapter 4 - Newton’s Laws of motion - . 4.1 force and interactions. a force is a push or a pull. it is an interaction

Chapter 4 Forces in One Dimension - . newton’s laws of motion. force is the action which has the ability to change

Forces &amp; the Laws of Motion - . chapter 4. 4.1 changes in motion. objectives : explain how force affects the

Forces and the Laws of Motion - . ch 4. forces. the cause of an acceleration or the change in an object’s velocity.

Chapter 4 Forces in One Dimension - . i. force and motion. force – . push or pull exerted on an object. forces cause an

Chapter 4 Force and Motion - . force and motion. a force is a push or a pull exerted on an object. can cause objects to

Forces and the Laws of Motion - . chapter 4. part 1. newton’s laws explain why objects move (or don’t move) as they

Chapter 4 Newton’s First Law of Motion: Inertia - . force – any push or pull friction – is the name given to the

Chapter 4 Force and Motion - . we have completed our study of kinematics. now it’s time to consider why objects should