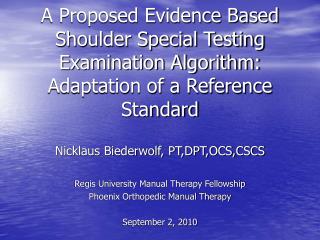 Standard Algorithm - . tuesday, september 16 2014. goal. i will be able to connect our diagrams and the distributive

Standard Reference Sources - . used to answer specific questions not generally meant to be read from cover to cover may

Weighing Evidence in the Absence of a Gold Standard - . phil long genome institute of singapore (joint work with k.r.k.

A Theory of Fault Based Testing - . larry j. morell presented by: joonghoon lee. a reliable test?. a test whose success