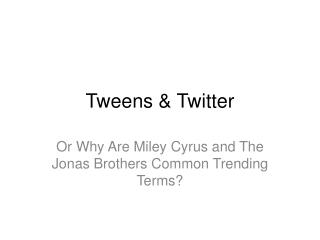 A quick overview of the growing influence of tweens on Twitter, circa mid-August 2009 Getting over fear of rejection – with Jia Jiang of 100 Days - Of rejection sponsored by:

My path to success – with Rachel Rofe - This episode is a little bit different from what i normally do, but it was

Follow @ residerocks on Twitter - . social crm: a new realm of b2b engagement. i guess .16 is a lot. introduction.

Internet &amp; Social Media Safety: Tips for Teens - . objectives. following completion of this session you will be