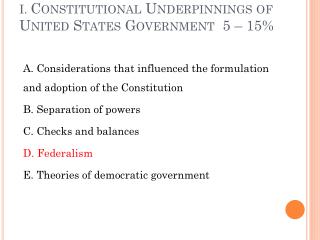 I. Constitutional Underpinnings of United States Government 5 – 15%. A. Considerations that influenced the formulation and adoption of the Constitution B. Separation of powers C. Checks and balances D. Federalism E. Theories of democratic government. Judicial Review.

AP Government Review - . unit 1 constitutional underpinnings. goals of the us constitution. create a strong union of