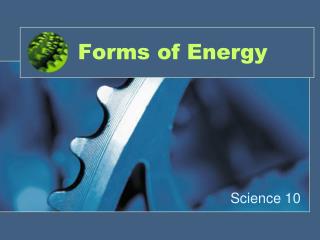 Forms of Energy. Science 10. Topics covered today. Outline of today’s lesson: What is Energy? Heat and Energy Different forms of energy Chemical Electrical and Magnetic Nuclear and Solar What is Potential and Kinetic Energy?. What is Energy?. What do you think Energy can do ?.

Heat can be transferred by: Conduction Convection Advection Radiation - . our atmosphere has a several gases that are

Forms of Energy - . qod. what are the 5 types of energy? potential energy and kinetic energy are examples of what type of

The Energy of Life - . energy is the ability to do work. biological work that requires energy. growing moving reproducing

Energy: its forms and uses - . what is energy? energy is defined as; the ability to do work or cause a change . energy

Types of Energy and Forms of Energy - . energy . energy exists in many forms. energy can be moved from one object to

Energy : Forms &amp; Conversions - . nature of energy. energy is all around you! you can hear energy as sound. you

E N E R G Y The major forms of energy (not all fundamental) are: - Mechanical energy, classically defined as the sum of

Energy and Its Forms - . describe the relationship between work and energy. relate kinetic energy to mass and speed.

Energy - . energy is the ability to do work. the following are forms of energy:. chemical energy. gravitational energy.

The Eight Forms of Energy - . energy can neither be created nor destroyed most the energy on our planet comes from the

In what forms, or types, does energy appear? - . potential energy is often referred to as stored energy. it can come in

Energy - . what are some ways we use or see energy being used?. some forms and uses of energy. what is energy?. energy is