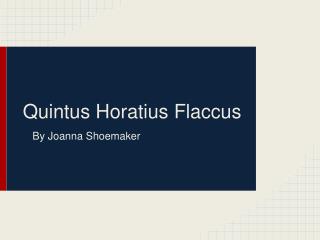 Quintus Horatius Flaccus. By Joanna Shoemaker. Early Life. - Born 65 BC in Venusia -Father was a freedman of humble means -Father took great pains to educate Horace, who studied in Rome and later lived in Athens. The Civil War years. -Served as an officer in Brutus' Republican army

ENTRY: HORATIUS AT THE BRIDGE - . focus: what are the characteristics of a hero? read, pair, share ask your partner: who

The V.I.P. in Basilicata - . pythagoras. the ionian greek philosopher and mathematitian, born in samos, moved to magna

Actium: The Birth of Augustan Literature - . the empire begins. the age of kings. the roman republic. 63 bc-ad 14. golden

Brutus - . character sketch. brutus is worried. brutus is introduced in act one, scene two. our first impression of him

Get to Know FRAD - . rda, frbr, and frad: making the connection glenn e. patton ala annual 2009. your acronym lesson.

HORACE MANN 1796-1859 “The Father of American Education” - . “education, then, beyond all other devices of human

I Lay My Sins on Jesus - . words by horatius bonar music by samuel s. wesley words and music public domain. 593. i lay my

VOCAB PICTO - . by: michael robert bock the iii. adjective what and jackson?.