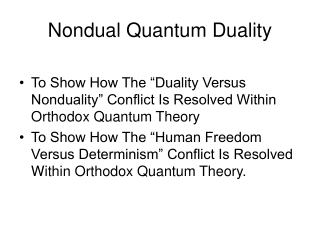 The duality of duality and non-duality - . anand rangarajan department of computer and information science and

Wave-Particle Duality 1 : The Beginnings of Quantum Mechanics - . define the relationship between quantum and photon .

Introduction to Quantum Computation - . andris ambainis university of latvia. what is quantum computation?. new model of

Quark-Hadron Duality in lepton scattering off nucleons/nuclei from the nucleon to the nucleus - . krzysztof m. graczyk